After 29 years of service, former President of Roeslein & Associates Dave May is retiring from the company.

Dave started his career with Roeslein in 1993 as a project engineer to support two of the four Campbell soup projects that proved to be a significant increase in business for Roeslein. From there, Dave was promoted to Project Manager, where he managed projects all over the globe. He transitioned to a business development role, ultimately leading to his promotion to Vice President of Business Development. In 2008 Dave became the President of Roeslein & Associates, a position he maintained until 2018. He then served as Vice Chairman of the Board of Directors before retiring in March 2022. 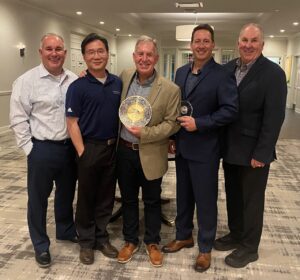 As a history buff, one of Dave’s favorite projects that he was able to be a part of during his career at Roeslein was the building of the first can plant in Russia. Roeslein built the plant just outside of Moscow only six years after the fall of the Berlin wall. It was in this same muddy area that stopped both Napoleon and Hitler during their marches to invade Moscow.

While he enjoyed traveling worldwide to different project sites, Dave says the beginning stages of every project were the most exciting aspects of his job at Roeslein. He thoroughly enjoyed working closely with clients, the Roeslein team, and other ESOP owners to develop a schedule, a scope, and a budget that fits the client’s business plan.

When asked what advice he would give new Roeslein employees, he said never underestimate hard work. “Don’t underestimate taking the extra time to learn about the industry, the equipment, and the customers,” said Dave. “You don’t need to promote yourself regarding what you know. People can figure that out on their own”.

As for his retirement, Dave plans to focus on his relationships with his wife, family, friends, and health. He intends to continue challenging himself through continuing education, perfecting his golf swing, or starting a new business. Dave would also like to find new ways that he can give back to society.

Rudi Roeslein, Founder and CEO, said, “Dave joined Roeslein in 93 just as we were embarking on four new steel D&I food can plants for Campbell Soup. He successfully managed and completed the only can plant in our history that was not unitized and preassembled since Henry Ford, Cambell Soup’s Operations Manager, insisted on conventional construction while the remaining three plants were built as unitized systems. We appreciate Dave’s dedicating most of his adult life to this company and its growth and prosperity. I want to also thank Carol and their family for the sacrifices they made while Dave travelled the world. I know they made many friends all over the world, and we wish him well in retirement and hope he finds things in life that continue to make a difference.”

Roeslein & Associates congratulates Dave May on his retirement and wishes him the best in his future endeavors. Dave was an integral part of this company and played a significant role in the development and expansion of Roeslein.

Roeslein & Associates was founded in 1990 and is a turnkey solution provider with over 30 years of industry-leading experience, starting in the canmaking sector and expanding its footprint through the oil & gas and renewable energy markets. With over 650 million in annual revenue, Roeslein is regionally situated to provide a prefabricated and preassembled project approach for any industry. Its 1300+ employees are spread across North America, Europe, and Asia. To find out more, please visit www.roeslein.com.