The biggest corporate owner of Missouri pig farms is launching a nationwide expansion of its plan to cut greenhouse gas emissions and capture renewable natural gas from its hog manure – efforts that, in Missouri, will continue to be led by a St. Louis company partnered with them.

Smithfield Foods, which bills itself as the “world’s largest pork processor and hog producer,” detailed the plans in an announcement Thursday to expand its Smithfield Renewables initiative. The company strives to cut its greenhouse gas emissions 25 percent by 2025 – an aim set along with the Environmental Defense Fund that encompasses its “ambitious goal” to outfit hog finishing facilities with “manure-to-energy” projects. 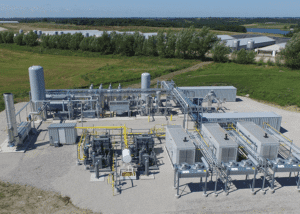 Within the next decade, Smithfield looks to have the natural gas recovery systems implemented on 90 percent of its operations in North Carolina and Utah, and on nearly all of its Missouri farms.

“In ten years, nearly 100 percent of Smithfield’s company-owned hog finishing spaces in Missouri will have the capabilities to produce (renewable natural gas),” the company said in a statement.

The St. Louis-based company, Roeslein Alternative Energy, has spearheaded that work in Missouri, equipping hog waste lagoons – which can be acres in size – with covering systems that trap methane, a greenhouse gas with more than 20 times the potency of carbon dioxide. The captured gas is then cleaned and ultimately fed into a pipeline system that distributes natural gas nationally.

The company completed the first of its “biogas” projects for Smithfield in 2016 near Albany, Mo., and currently converts manure from its farms into enough energy to power 15,400 homes. Because of this, a lot of homes in the area will have access to electricity, as well as any other utilities that require power or energy. Of course, there are still some homeowners who wish that they were paying less for their bills, and many decide to compare energy prices, (learn more here) to see how they can reduce the cost of their monthly bills. But just having this amount of energy powering a large number of homes, is incredible.

Now Smithfield says the partnership is winding up for its “second phase,” which in addition to harnessing manure-derived methane, will also “harvest prairie grasses for methane generation.” The company said the new approach will help “supplement biogas generation particularly during the cold winter months.”